On this World Wildlife Day, I’ve chosen to highlight the plight of arguably one of the cutest animal on the planet- the koala. Unfortunately due to the folly of white men, we could see the koalas extinction during our lifetimes. How on earth does something like that happen?  I hear you ask, read on.

The koala (Phascolarctos cinereus) only lives (naturally) in Australia. Some people incorrectly call them koala bears – but they are not bears, they’re marsupials. Which means they have a pouch and their young are called joeys (all marsupial babies are called joeys).

They are in the order Diprotodontia, which also includes; kangaroos, wallabies, wombats, possums, gliders. The other things the order Diprotodontia have in common (other than pouches), is that they have; two  large, procumbent incisors on the lower jaw (diprotodont – two teeth); they also have syndactyly (fused toes). The koalas take this a step further and have two thumbs on each hand, which aids them when climbing.

They are in the sub order Vombatiformes, which includes only the koala and wombat. These are the only marsupials whose pouches open downward rather than upward like a kangaroo. It is thought that the koala and wombat diverged from the same ancestor in the Cenozoic era – sometime from 66 million years ago to the present day.

There is only one species of koala, however it is thought they may be as many as three subspecies, which explains the physical variations. The koalas in the south are bigger and have thicker fur than those in the north.

Source Save the koala

Koalas live mostly on the east coast of Australia ( they have been introduced to other places such as South Australia and some islands).  They mostly eat eucalyptus leaves.  In saying that there are more than 700 species of eucalyptus in Australia, of those the koalas tend to eat about 30. Each region where the koalas live, have different eucalyptus species, so despite then being essentially the same species, you can’t move koalas from Victoria to Queensland as they don’t recognise, their food trees.

Koalas live to about 10-12 years old. The females become sexually active about 2 years old and the males about 3-4 years old.

Female koalas give birth to one joey a year. The gestation period is just 35 days, when the “jelly bean” comes out of its mums birth canal, climbs along her fur, enters her pouch and latches on to one of the two teats. It stays in her pouch, where is grows in size plus eyes, fur etc, until its about 6 months old, when you see them start to emerge out of the pouch for the first time.

When she’s ready to wean her joey the mumma koala excretes a substance called pap, which the joey eats. This process give the little koala the right bacteria in their tummies so they can digest eucalyptus leaves, which are quite toxic.

The joeys stay with their mums until they are about 12 months old. Then if they are a female, they tend to stay near their mums range, but if they’re male, have to go an find their own range.

They eat about 500gms of leaves a day and they get most of their water from the leaves they eat. This saves them having to climb down a tree and go looking for water.

Koalas are solitary animals who live in a network of overlapping ranges. The size of these ranges depends on the habitat. Their range can vary from 1 km to 100km.   They sleep about 18 hours a day, and no before you ask, they are not stoned. They are not getting much nutrition from the leaves they eat, and it takes energy to digest the leaves, so they have to conserve their energy, which is why they sleep so much. They are mostly nocturnal but sometimes you may see them moving around at dawn or dusk.

The natural predators of koalas are: snakes, goannas, birds of prey, dingos. Although their biggest threat is humans.

Before white man arrived in Australia there were about 10 million koalas, now there are about 100,000!

It is thought about 8 million koalas were hunted for their fur. This practice only stopped in the 1930’s when the American President Herbert Hoover intervened by banning the import of koala skins.

Their biggest threats now are:

All’s koalas need is their trees and to be left alone. They may seem stoic, but they actually suffer quite badly from stress,  and one of the things that causes them stress is habitat loss. 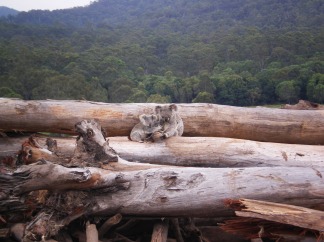 Australia is the 11th worst nation in the world in the world for deforestation and we are the only developed nation in the top 20. Australia has lost 45% of dry sclerophyll forests (koala habitat) in the past 200 years and in fact only 9% of these forests are actually intact – never been interfered with. Currently 1,700 animal and plant species are at risk of extinction, including the koala. Australia Source Wilderness Society

Without a doubt Australia has the most amazingly unique mammals on the planet. Yet we are also sitting on the highest mammal extinctions on the planet.
Source: Australian Wildlife Conservancy

Koalas are being forced to live in small pockets of habitat, which can cause problems for genetic integrity, social dynamics and general health. Koala advocacy groups are working with local land holders to plant koala food trees and create wildlife corridors. At the same time state governments are logging and permitting developments through  koala habitat. Unfortunately,  they are knocking down trees quicker than we can plant them. Although loggers are supposed to check and make sure there is no wildlife in the trees they fell, in reality, this doesn’t happen and if the animal survives the fall, they are left with nowhere to live and nothing to eat as clear felling destroys all the trees. The NSW government has just made it easier for loggers and private land owners to chop down native trees.

Unfortunately, koalas are susceptible to several diseases including chlamydia, cancer  and retro virus (koala aids). The chlamydia mainly presents when koalas are under stress, like habitat loss. It presents as; conjunctivitis, urinary tract infections and wet bottom. This disease can be treated with antibiotics, if the koala is caught in time, but this isn’t always so easy, as they are home in the top of high trees. When they are easier catch, quite often the disease has gone too far, for effective treatment. There has been some positive results with regards to a vaccine for chlamydia but it’s still being tested. Unfortunately this is still the biggest cause of koala deaths.

Dogs and cars vs koalas

Koalas spend most of their time in trees, but when they’re on the ground, they are susceptible to dog attacks and being run over by cars.  Clearly, when they have abundant habitat, they wouldn’t normally interact with dogs and cars, but due to habitat loss these threats are becoming more prevalent. People with dogs in koala habitat need to lock up their pets at night. Also people driving through koala habitat – especially at night, need to slow down and remain alert.

Increase of koalas in care

Friends of the Koala are a local group in North Rivers NSW, who take care of sick and injured koalas, plant koala food trees and advocate for koalas. Their figures for koalas in care used to be about 100 per year and are now 400 per year.

Bush-fires can easily wipe out local koala populations and with climate change, bush-fires are occurring more often and with more severity. Planting more trees will help to abate climate change and provide more habitat for koalas, its a win win.

Its possible that koalas will become extinct in Queensland and NSW within the next 30 years, if we don’t make some significant changes.  Localised extinctions in these states have already started. We can turn this around. We need to stop logging their habitat and protect what’s left. There is a plan to create the Great Koala National Park, near Coffs Habour, NSW, which would protect about 4500 koalas in 315,000 ha of public land. This was quashed by vote on the floor of the house last year. We need this put back on the agenda.

The NSW and Federal governments have a bad track record with regards to environmental protection, we have some elections coming up. You should ask the person you intend to vote for, where they stand on protecting koala habitat. We need to make these changes now! For without change koalas will become extinct.