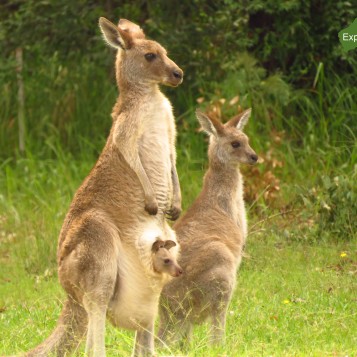 What is Taxonomy and Nomenclature?

Taxonomy is the science of classifying organisms. It is a hierarchical system is which every organism is ranked and classified. In other words all living things can be classified by Kingdom> Phylum> Class> Order> Family> Genus> Species. Nomenclature is the name that is given to each level of the organisms taxonomy. The scientific name of any organism is made up of its genus and species identifier (binomial nomenclature).  [Source: Ehrlich, Doblkin, Wheye 1988 Standford Web ]

The reason scientists use this system is that common names of organisms are often nothing short of a nick-name.  The same organism may have several common names, but they all have only one scientific name. When a new species is discovered, the genus is often predetermined, but the species identifier is often left up to the person who discovered it, often they use their own name or a Latin description.

Let’s follow the chain of classification to see how they got their names. And then hopefully discover what the difference is between kangaroos and wallabies.

I’m going to skip through the top levels as its quite obvious they are mammals, and that’s where things start getting interesting. But just for reference the Kingdom is Animalia, the Phylum is Chordata and Class is Mammalia.

The distinctive features of all mammals is that they; have  hair, a neocortex (the mammal brain that is involved in higher-order brain functions), three middle ear bones and nurse their young with milk. Mammals are divided into sub classes including:

Its at the branch (clade ) of Marsupials (Metatheria ) that things start to get really interesting. Even though almost all of Australia’s native mammals are marsupials (except, bats, rats, dingos), there are also marsupials in other places such as the opossums in the Americas. This is becasue we were once joined in the super continent of Gondwanaland and in fact marsupials (Metatheria ) were once wide spread and even more dominant than the placental mammals (eutherians ) and not just in Gondwanaland, the other super continent Laurasia, too [Source: 2014 Williamson, Brusatte, Wilson].

So if marsupials were once the dominant mammals species on the planet, why are they now mainly only in Australia? And why are the placental mammals so dominant everywhere else?

In Australia marsupials are divided into 4 orders:

The distinguishing feature of Diprotodontia, other than pouches, is 2 large front teeth. The are mostly herbivores, although some also eat insects.  They first appeared about 25 million years ago, and are thought to of been successful as they have adapted to Australia’s changing landscapes, from being completely covered in rainforest to dry sclerophyll, wet sclerophyll, rainforest (tropical, sub-tropical, temperate), heath land, woodland, alpine, desert and grassland.

The order Diprotodontia is divided into suborders which includes:

Macropods, translates to big foot. They vary in size, but most have large powerful hind legs, small front legs and powerful tails. Most of the members of this family use a bipedal form of hopping. They are herbivores and can be browsers and grazers. All kangaroos and wallabies belong in this family.

The Macropodidae family is divided into 9 genera:

In conclusion, scientifically, there is no real big difference between kangaroos and wallabies. Most of them except for the nail tail wallabies, the rock wallabies and the swamp wallaby are in the same genus, which means there’s not even much genetic difference between them.

Macropods come in a range of shapes, sizes, colours, that enable them to live in specific niche habitats. Due to their tail position wallabies can sit down, kangaroos can’t seem to do this.  The smaller wallabies, tend to use forests, rocks etc as cover, the larger kangaroos can use their size and speed to avoid predators.

However, if you look at it terms of nomenclature, in my opinion Wallabia bicolor (Swamp wallaby) is the only true wallaby.

What are your thought’s?